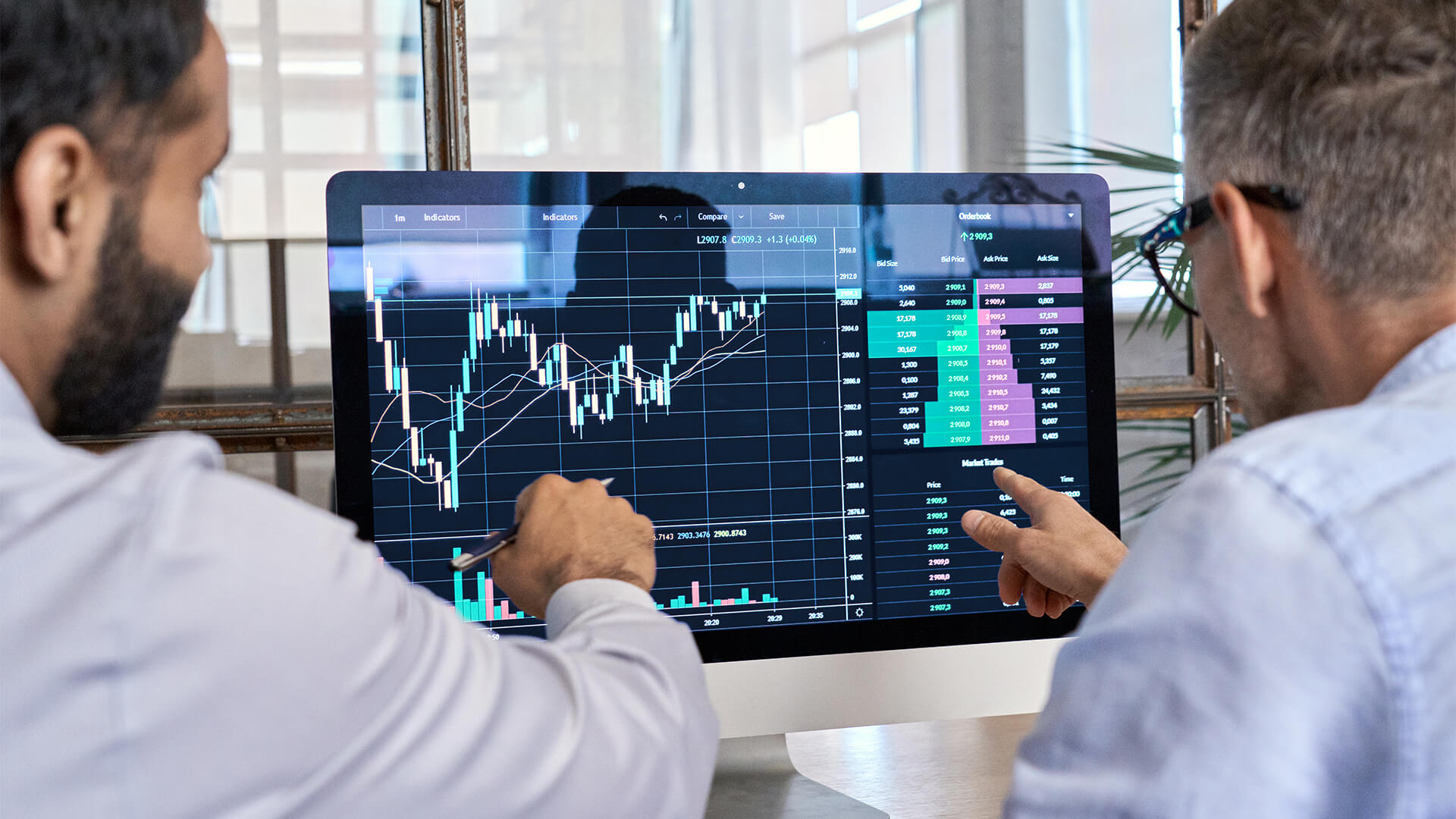 Is It Time For Retailer Investors to Move Away From Tech Giants?

Home  »  Articles  »  Is It Time For Retailer Investors to Move Away From Tech Giants?

Is It Time For Retailer Investors to Move Away From Tech Giants?

Facebook, Amazon, Apple, Microsoft, and Google (FAAMG) represent the most publicly traded technology stocks by market capitalisation. Collectively, FAAMG stocks are worth several trillion dollars and are widely considered market movers due to their value relative to the S&P 500’s total holdings.

According to Maxim Manturov, Head of Investment Advice at Freedom Finance Europe, technology giants suffer from high-interest rates due to their stocks trading on an expectation of higher returns in the future, which are risks investors are usually unwilling to take in a turbulent economic environment. This includes FAAMG stocks.

However, in times of heightened volatility, solid opportunities for long-term investors arise as these companies continue to lead the market with steady growth prospects. Crucially, investors must examine how these tech giants fare during soaring inflation and macroeconomic instability.

Meta a bet on Mark Zuckerberg

Meta is undergoing significant business transformation during a challenging macroeconomic period and within a highly competitive market. Mark Zuckerberg’s bet on the Metaverse is one the market does not yet fully understand, leaving Meta as the most rapidly declining stock among big techs.

Meta reported better-than-expected revenue of $27.7 billion (£22.93bn) in Q3. However, rising operating costs and fluctuations in the currency market led to a significant drop in net profit. While the outlook for Q4 fell short of expectations, the outlook on 2023 costs shocked the market.

Despite the drop in revenue, Meta forecasts 2023 expenses to be $96-101 billion (£79-84bn), a 15% year-on-year increase. Although rising costs are frightening, aggressive investment during the recession could yield solid returns for Meta in 2024 and beyond, should the Metaverse venture prove viable. Meta’s liquidity position looks impeccable – enough to survive an economic downturn – with a net cash balance of around $31 billion (£26bn).

Amazon’s revenue has fallen short of expectations with the cloud business gradually slowing in line with the decrease in the cloud at Alphabet and Microsoft, meaning Amazon Web Services is not losing its share. However, even with this slowdown, the cloud business is still growing at an annualised rate of 28%.

Meanwhile, growth in the advertising sector accelerated to 30% during the quarter, which is impressive against the backdrop of both Meta and Alphabet YouTube divisions reporting negative growth in advertising revenue. This is an area where Amazon is clearly gaining significant market share.

The online retail business has returned to growth after three consecutive quarters of contraction due to fierce competition, while the physical shop segment continues to grow steadily. Of course, profit margins are under pressure, and overall revenue growth is slowing. But this is almost entirely dependent on headwinds in the foreign exchange market, which will likely subside in the coming quarters.

Amazon is still the leader in the cloud industry with consistent growth. It is a share gainer in the ever-growing digital advertising industry, and the giant is still successfully defending its throne in the ever-growing e-commerce business. Despite weak forecasts for the next quarter, there are reasons to remain optimistic about the company’s long-term prospects. Since Amazon’s e-Commerce margins can be boosted by continued revenue growth from its cloud and advertising businesses, the company will benefit from increased market share and lower costs going forward.

Apple’s report was the brightest in the big-ticket segment and supported the market, given its large capitalisation, proving once again the strength of the business in a challenging macroeconomic environment with record revenue over the past quarter.

Apple has maintained its status of ‘cash flow king’ with a result of $20.182 billion (£17bn) in September 2022, up 51% year-on-year. Apple also has a strong balance sheet with $48.304 billion (£40bn) in cash. Despite tough economic conditions, the company continues to post good sales, allowing Apple to still be considered a solid long-term investment.

Modest predictions from Microsoft were its downfall

Microsoft’s revenue and profit results surpassed analyst expectations. However, investors were frustrated by the giant’s modest financial forecast which triggered the stock price to fall. Wall Street had expected Microsoft’s revenue forecast for the end of Q4 to be $56.1 billion (£46bn), with the company itself forecasting a deficit across the board and revenue in the range of $52.4-$53.4 billion (£43-44bn) at the end of Q4.

Nevertheless, Microsoft has a positive future. Its prospects aren’t particularly worrying in the face of short-term headwinds.

While average estimates now assume revenue growth of around 7% in the 2023 financial year, the market average expects an increase of 14% over the next three years. On the revenue side, average estimates assume growth of just 5% this year, followed by growth and recovery of 17% in fiscal 2024. This is a result of Microsoft creating barriers to entry and its competitive advantage in PC software, enterprise software, social media (LinkedIn), gaming and the cloud.

Profits at Alphabet, the parent company of Google and YouTube, came in well below expectations in Q3. However, it’s important to remember that Alphabet remains one of the market leaders in advertising, even as the economy weakens. Revenue seems to be falling across its core businesses. For example, Alphabet’s advertising revenue came in at $54.48 billion (£45bn), well below the expected $56.9 billion (£47bn). YouTube advertising revenue fell short of the $7.5 billion (£6.2bn) forecast with a result of $7.07 billion (£6bn).

Google Cloud’s segment revenue delivered above what was anticipated, with $170 million (£141m) above the expectation of $6.7 billion (£6bn). In any case, Alphabet is primarily an advertising firm and weak results overall could present some headwinds for the stock as it is anticipated that spending on advertising will deteriorate with the economy.

However, businesses are most likely to advertise on the search engine network than other avenues, providing Alphabet with a strong competitive advantage. Markets are focused on the future, Q3 earnings are already in the past, and any hints of a recovery in the advertising market have the potential to trigger a rebound for Alphabet shares.

Being realistic, we all have a bit of Hyacinth Bucket instilled in us — in that rivalry with our neighbours is something that is preconditioned within us. When the hypothetical family from number 28 parade the street in their new Mercedes GLE, doing somewhat

“Proposals to end austerity and increase departmental spending are wholly misguided given that the UK is still running a deficit of £90 billion a year and the government is spending nearly half of national income. Small steps to reduce the deficit have been

Traditional UK Banks Are Failing To Engage With Users One in five UK bank customers happy to see branches close in favour of improved digital experiences.Boomi™, a Dell Technologies business, announced the results of its research on banks’ engagement

The property, which extends over 4,419 square metres of warehouse and office space, is used by Deutsche Post DHL Group to operate a mechanised delivery site (German: MechZB) for parcels. Completed in 2013, the property sold for an amount in the double-digit mi

The Council of the Islamic Financial Services Board (IFSB) has today resolved to admit Bank of Korea into the IFSB membership as an Associate Member.The 24th meeting of the IFSB Council, hosted by Autoriti Monetari Brunei Darussalam (AMBD), was held on

ClearSlide, the Sales Engagement Platform leader, and LevelEleven, the leading Sales Activity Management System, today announced a partnership and integrations that will deliver significant sales productivity improvements for any company.According to global sa

If you want to be a leading business in your market, you must have a reputable brand. Brand awareness is one of the most significant factors that contribute to the successful running of a business. You want to make a great first impression that will last if yo

Despite crypto being on a downturn, builders are optimistic about the future, with each NFT meetup gathering more and more creators looking to network, discuss ideas, and talk over novel use cases.Following the crypto market downturn, skeptics keep painting a