The Economic Crisis, The Role of Central Banks & Whether Helicopter Money Can Save The Day

The world’s central banks (US Federal Reserve, Bank of England, Bank of Japan and the European Central Bank) play a crucial role in the global economy. Broadly speaking, they serve as both policy maker and lender of last resort and their objective is to help keep their respective economies in balance. 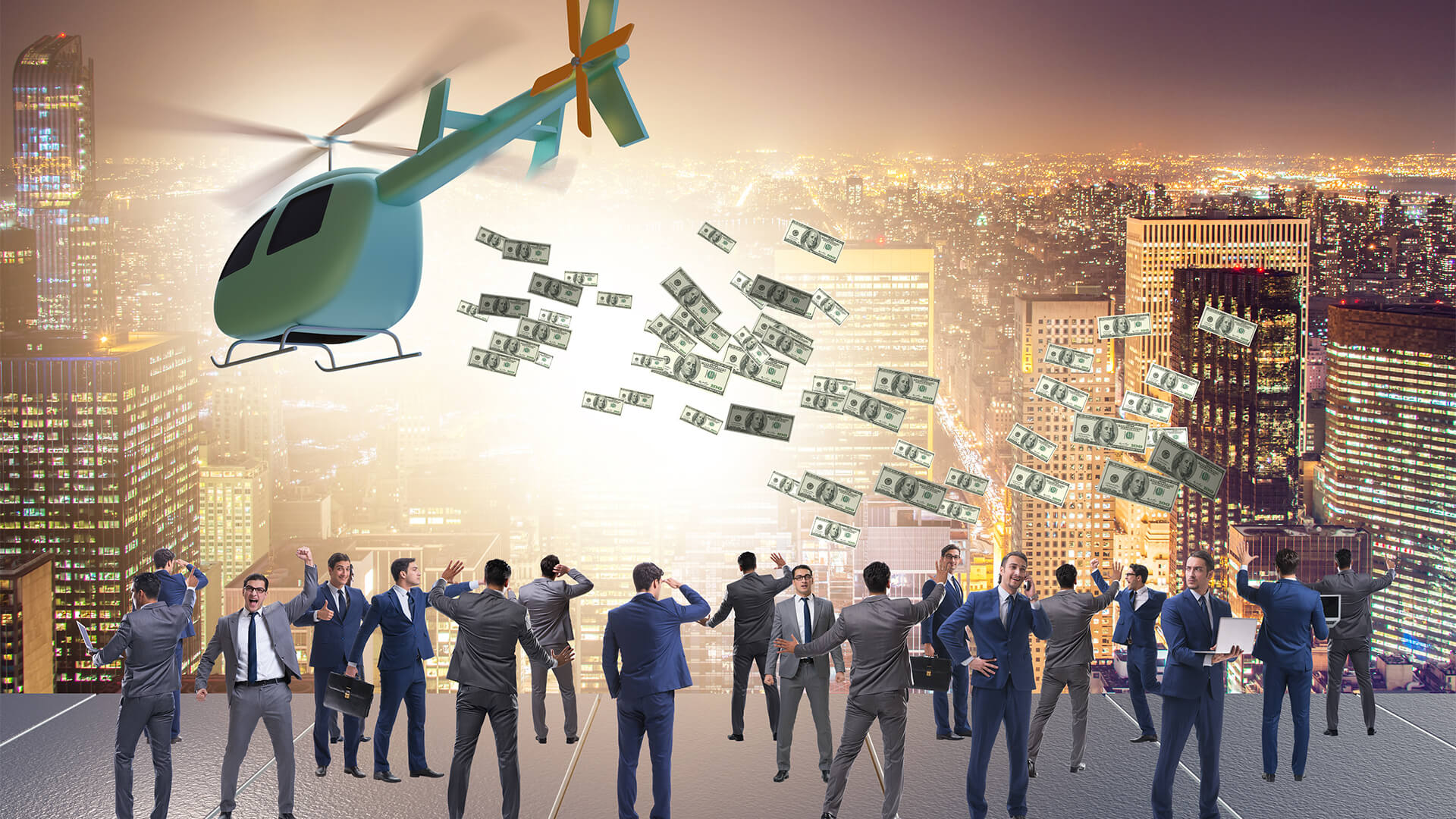 The world’s central banks (US Federal Reserve, Bank of England, Bank of Japan and the European Central Bank) play a crucial role in the global economy. Broadly speaking, they serve as both policy maker and lender of last resort and their objective is to help keep their respective economies in balance.

Central banks monitor carefully the economy and the financial system and pay particular attention to the speed and temperament of growth. What do they want to see? Monetary officials like when the temperature of inflation and the economy is not too cold nor not too hot, think of it like goldilocks, namely ‘just right’. But when growth begins to overheat, that’s often when they jump into action to help cool things down. Equally when crisis hits, central bankers tend to be the first we call upon to help put out any financial fires.

How central banks manage the economy?

Well, they don’t really manage the economy; businesses and consumers do that through their buying and selling; banks do so via their lending decisions – but monetary officials still maintain a tremendous amount of influence over the economy.  One way they exert control is by setting interest rates. For example, when central banks lower borrowing costs, businesses and individuals tend to ‘feel richer’ and can divert capital they would have allocated to servicing debt into investments, hiring and spending (or at least in theory).

Central bankers can also allow lenders to increase their leverage levels, meaning banks can lend more money – which can free up the balance sheet to make more profit (assuming there is demand for lending).

Finally, through communicating (what central bankers call forward guidance), they can telegraph to the markets their intentions, enabling businesses, lenders and traders time to prepare and position.

What tools are left in the toolbox after interest rates have been cut to zero and capital ratios relaxed? Well when the conventional is exhausted, they go unconventional – and that’s exactly what the Fed did after the global financial crisis in 2008 – they took it to the next level via large scale bond buying programmes, otherwise known as quantitative easing (QE).

That’s money printing, right?  Wrong, that’s a myth. QE is but a maturity transformation exercise during which the central bank buy bonds (taking them out of circulation) and replace them with cash.

This floods the market with liquidity, pushing the price of bonds higher and the yield lower (a condition market participants refer to as financial suppression). This can drive investors into other higher yielding assets such as corporate bonds, listed stocks and property – thus creating demand for financial assets which in turn inflates their prices (or at least stabilises them). But it can also lead to the hoarding of cash.

And the Fed didn’t stop there, during the financial crisis and in their coronavirus pandemic response they also bought (and continue to buy) residential mortgage bonds. Are they interested in building a portfolio of properties and/or foreclosing? Of course not, they do this to ensure mortgage rates stay low – which creates a sense of confidence and encourages home ownership by making housing more ‘affordable’. And it has worked, look no further than the housing market data from sales to starts to prices to sentiment, it’s been a healthy market.

If central banks aren’t printing money, who is?

It’s the commercial/private banks (and shadow lenders) who perform the alchemy of money creation, not government. Every time a bank issues a new loan, one must think about it like a leveraged deposit. When one bank issues a loan, it becomes the deposit of another financial institution and it’s this multiplier which in essence creates new money. And of course, they also control the destruction of money – when loans are retired and credit contracts.

But it’s not so simple, there needs to be lending opportunities in the markets and confidence in the system in order for banks to have the appetite to lend and the pricing needs to be perceived by the borrowers as attractive in order for businesses to accept the terms.

The role of governments

Coming back to crisis fighting, monetary policies can only take us so far but if we want to go the full distance, we need fiscal support.  Fiscal policy is the domain of governments, elected politicians, those individuals and committees who control taxation and spending.

Government bodies also set regulations and employment laws which can have a significant impact on the daily decisions made by businesses around the country. For example, if a government wants to orchestrate a short-term boom, they can deregulate and slash taxes (but pay the price of potential environmental damage, social unrest and/or higher government debt later).

But what happens when central banks run out of ammo, governments become desperate to foster growth, banks can’t lend and/or businesses don’t want to borrow?

Can Helicopter Money save the economy?

If conditions get bad enough, central banks and governments can throw out the rule book, circumvent the private sector, take to helicopters and go ‘all-in’. We have all heard about helicopter money, but what is it? Heli-money is fundamentally different to QE in that there is no exchange of assets. It is merely a one-way forgivable transfer (unlike QE which is a two-way exchange [but not forgiven]). In a stylised example, the government issues bonds which the central banks buy and then cancel, in turn allowing the government to issue cheques that could then be deposited into bank accounts for citizens to spend.

The attraction of implementing Heli-money is high, because it can, in theory, be used by politicians to potentially ‘address’ growing inequality. Helicopter money can appear to help a broader base of family income statements in a very ‘democratic’ fashion whereas QE has appeared to only help those having a big balance sheet. BUT it’s only optical.

Helicopter money isn’t the answer to our financial woes

The reason why QE is not a free lunch is because the money ends up back in the form of reserves, and central banks (such as the Fed) end up paying interest on reserves and excess reserves (to preserve the floor in rates), so it’s not really free.

Secondly, once the bonds are paid for and then ‘written-off’, the central bank may have its equity wiped out. Don’t forget a central bank has a balance sheet just like any other financial institution.

Finally, it may just not be legal nor is it clear who decides the size of the ‘one-off offering’ thereby putting the independence of the monetary authority in question. In order to promote financial stability and a well-functioning economy, we need to ensure central banks remain strong, solvent and independent.